CPR Station
The Brampton Historical Society is dedicated to the preservation, restoration and suitable re-use of the old Brampton CPR Station.
The station was in danger of being torn down in 1995 when, as a last resort, members of the Brampton Historical Society photographed it, measured it, numbered the bricks and dismantled it. The station, designated under the Ontario Heritage Act, has a varied history in Brampton. The original red brick building featured a slate roof and high arched windows, 12-foot high ceilings, maple floors and five feet of tongue-and-groove wainscoting. It was built at Queen Street and Park Street.
The Canadian Pacific Railway played an important role in the development of Brampton and many significant events began and ended within the old station’s walls. The Dale Estates, the largest producer of roses in the British Commonwealth, shipped its flowers to Toronto and across North America from the station. It was used as a meeting hall where townspeople would congregate to hear the latest news over the wire. CPR Agent Thomas Thauburn, the Brampton stationmaster in 1908, later became the mayor of the Town of Brampton. Special trains ran out of town for Brampton Excelsior lacrosse games and provided full service to the Canadian National Exhibition.

Passenger service was at its peak in the 1940s with two morning and two evening trains daily until the 1960s. The last CP passenger train departed on Nov. 30, 1970. For 10 years after that it was used as CPR storage. In 1977, the railway planned to tear it down, but the newly formed Brampton Heritage Board saved the building. The CPR had already hired a demolition company, but the City of Brampton got a court injunction to stop its destruction while plans were made to move it. John Hutton bought it for $1 and, with the help of a provincial grant, moved it to a property on Third Line West. He operated a nursery out of it until 1988 when the property was sold to build Lionhead Golf Course.

The station was left unused and fell into disrepair. It was again on the verge of demolition when the newly formed Brampton Historical Society saved it, dismantled it and moved it to a storage location. But now the saga of the station is complete. In 2010 and 2011 the station was reconstructed as the main entrance to the combination library, recreation centre and elementary school in the new village of Mount Pleasant. Overlooking the reflecting pond and fountains of Mount Pleasant Square, the old CPR station has been restored to its previous majesty to provide a continuing reminder of the importance of the railway to Brampton and its affect on our history. 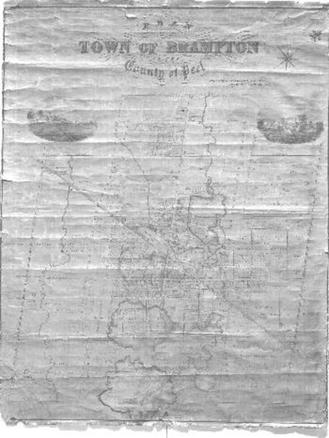 Bristow Fitzgerald Map
1857 Map of the Town of Brampton
This rare map, acquired in 1999 by the Brampton Historical Society, is the earliest known map of Brampton in existence. Because of the historic significance of this document, the Brampton Historical Society received a grant to pay for its restoration. Due to its fragile condition, the original, restored map is on display at the environmentally controlled Museum at the Peel Art Gallery, Museum + Archives

Poster size copies of the Map, suitable for framing, are available at a cost of $10.00 including taxes at:
Peel Art Gallery Museum and Archives PAMA 9 Wellington St E, Brampton ON
Historic Bovaird House Bovaird Road E and Kennedy Road Brampton ON 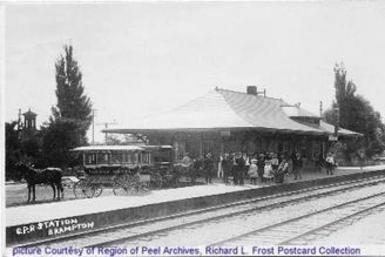 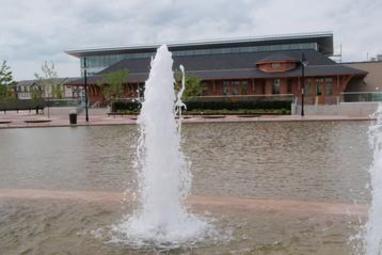