Our bursary award was created in Memory of Paul Hunt who led a one man campaign to save the old Brampton CPR station from destruction. Out of this effort, the Brampton Historical Society was formed in 1999.

The Brampton CPR station was originally located on Queen Street West between Park Street and West Street, 4 blocks west of Main Street. In 1969 the passenger rail service on the CPR line through Brampton ended and the station was abandoned.  Originally built in 1902, the station served Brampton as a major transportation hub for 67 years but it was slated for demolition by the railway.

Led by Brampton City Council and the Brampton Heritage Board, the station was moved to Huttonville in 1981 to be used as a garden centre, however the land was sold to a developer in 1988. History would soon repeat itself when in 1995, after a complaint to the City’s by-law department about the condition of the building the historic structure once again was threatened with demolition.

Paul Hunt was a local historian and was convinced that the station should be preserved for future generations to enjoy. After 4 years of discussion and arguing, it was agreed, at Paul’s insistence, that the station should be photographed and measured, the bricks numbered and the building dismantled and stored for future use. Because of his insistence on preserving this station, the Brampton Historical Society was formed 1999.

But the story is not yet complete. The new village of Mount Pleasant is being built in the north-west quadrant of the City, near the Mount Pleasant GO station on Bovaird, off Creditview Road. The City is building a cultural facility in the Mt. Pleasant Civic Square which will be shared with the Peel District School Board and the Brampton Library. The reconstructed historic CPR station will be incorporated into this facility. When completed, the station will overlook the reflecting pool and be the main entrance to the building.

This Bursary is open to any student who is a resident of Brampton, graduating from a public or separate secondary school within the Region of Peel. The student must be accepted into an accredited Canadian post-secondary institution and intends to major in Canadian history or related subjects.

Bursary details: Up to two bursaries to be awarded on an annual basis in the amounts of $500.00 each.

How to apply: The application is to be made in writing to the Brampton Historical Society by the applicant and received on or before July 15th in the year the bursary is to be awarded. The application shall include the student's name, address, email address, phone number and school attended.

In addition the applicant will provide the names, email addresses and phone numbers of two references, at least one of whom shall be a member of the teaching staff of the student’s secondary school. Accompanying the application will be a 150-word thesis, written by the applicant outlining his/her interests in Canadian history and career aspirations. As well, the applicant shall provide evidence of having been accepted into a Canadian post-secondary institution along with the course outlines of their program of study.

Evaluation & Selection Process:  All applications will be reviewed by the Brampton Historical Society Executive. Non-qualified applicants will have their applications discarded. The Executive may then select, by a majority vote, to award one, two or no bursaries, based on the merit of the remaining applications. The decision of the Executive shall be final and binding and shall be conveyed by mail to each applicant on or before September 15th.

Conditions for accepting a bursary: A student who accepts the bursary shall agree to either prepare an article for publication in “Buffy’s Corner” (the Society’s newsletter) or address a general meeting of the Society on a subject of their choosing and relating to their programme of study.
The Society reserves the right to publicize the names and photos of the bursary award winners in “Buffy’s Corner”, on the Society’s website and in the local press. 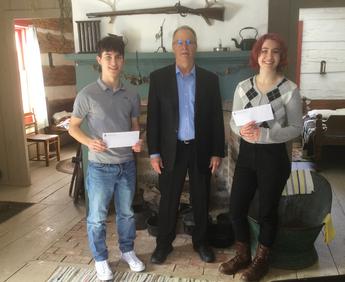